I'd mentioned a band of energy around my skull and a friend asked for a fuller explanation. This explanation comes from my years of experiencing my energy body and what I did to effect changes to it. I was born with this awareness. I didn't know until my early twenties that others didn't share this experience.
++++++++++++++++++++++++

When you see Christian paintings with halos, the halos are symbolic of a band of energy that goes around the crown of the skull.

Think of the spine as a 220 volt current, and the body 110. In the arms and legs you have a strong lines of current. Same for chest and back.

The restrictions in the flow of energy in the body are a reflection of and embodiments of the patterns of thought on the mental landscape.

The muscles tend to hold those restrictions, so when I did the bellows breathing, the muscles in my arm would spasm as that restricted flow opened up.

Took a year of doing bellows breath 3 to 4 hours a day to open the various restrictions in energy flow around my body.

When you had that experience of muscles of your back in spasms (when I touched your back to transfer energy), that extra current released some restriction and tension in those muscles. Now when you get to the head, there is a really tight band of energy that runs around the skull. It's supper strong, super intense, and very difficult to change the flow. When I did bellows breathing and managed to open that band slightly, the released force would throw me out a bed into a wall.

When I experience that flow now, it feels like a tight, metallic band.

Many years ago while in therapy I was doing five 12 step groups a week. Since there was a lot of quiet time, I would visualize a current of energy going from my spiritual eye back to the medulla and then back to the spiritual eye.

I basically did this for an hour a night, for six months. As time when on, I could feel the flow of energy.

Then one of those bands rolled on one side of my head. That's when I started to go into high moods of creativity, connecting to info in the universe, not in my mind.

11 weeks later the other side rolled, and my states of intense creativity and connection to a deeper understanding coming in from outside my mind continued.

11 weeks later, the tight bands of energy around my face opened up.

This was all accompanied by my getting my brain re circuited, a very odd and strange process. Think skull being drilled and ants walking on skull. But when those new circuits opened, I could stay in a high mood as I taught.

The work I'm doing now is to again open that band around my crown.

My friend asked me about how this relates to her experience of Satori, an expansion of consciousness and feeling connected to the wider universe.

When I was young, I thought deep meditation would make me great at relationships, but I was terrible. I was raised in a dysfunction environment and that was the mind and body I returned to when I wasn't meditating. The lessons I learned growing up where embedded in my mind. I needed therapy to start unlearning those lessons.

Bill Johnson is the author of a writing workbook, A Story is a Promise, available on Amazon and Smashwords. The ideas in the book came from his spiritual experiences. 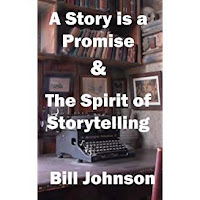 Posted by BillJohnson at 1:44 PM

Email ThisBlogThis!Share to TwitterShare to FacebookShare to Pinterest
Labels: A Story is a Promise, creativity, meditation