Writing a Novel With a Message, Notes on Ray Bradbury's Fahrenheit 451 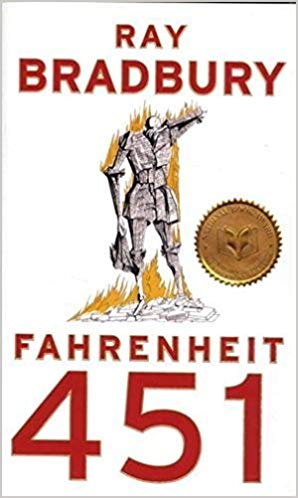 Some novels are written to convey a direct message to a reader. One such novel is Ray Bradbury's Fahrenheit 451.

In this novel, it is the job of fireman not to put out fires, but to burn books. Writing about a society that would destroy books is a commentary on life in the 20th century.

The novel opens with a sentence that meets the prime directive of a first sentence: give your reader a reason to read a second sentence.

"It was a pleasure to burn."

The immediate questions, what is a pleasure to burn; and what is 'it.'

To get answers, we must continue reading.

This raises the question, what is being 'eaten' and 'changed' to create this special pleasure. Who will experience this pleasure?

"With the brass nozzle in his fists, with this great python spitting its venomous kerosene upon the world, the blood pounded in his head, and his hands were the hands of some amazing conductor playing all the symphonies of blazing and burning to bring down the tatters and charcoal ruins of history."

This sentence introduces the main character and how he feels as he holds this 'great python spitting its venomous kerosene upon the world.' This is someone who loves his work. It also raises questions, what is this 'charcoal ruins of history? What is being burned and destroyed?

"With his symbolic helmet numbered 451 on his stolid head, and his eyes all orange flames with the thought of what came next, he flicked the igniter and the house jumped up in a gorging fire that burned the evening sky red and yellow and black."

We know now that he is burning a house, but why? For all the intensity of the moment, he's described as having a 'stolid head.' We're learning more about the character and more about the situation, but both are still mysterious to a reader. Why is a fireman burning this house? What is the meaning of 451?

"He strode in a swarm of fireflies. He wanted above all, like the old joke, to shove a marshmellow on a stick in the furnace, while the flapping pigeon-winged books died on the porch and lawn of the house."

We now have the shocking revelation of what he is burning, books.

"While the books went up in sparking whirls and blew away on a wind turned dark with burning."

This is the end of a first paragraph. Our fireman thinks of roasting marshmellows while burning books. This conveys who he is and a potential arc, what could change this man?

"Montag grinned the fierce grin of all men singed and driven back by flame."

Now the author gives this character a name, after first conveying who this man is.

"He knew that when he returned to the firehouse, he might wink at himself, a minstrel man, burnt-corked, in the mirror. "

Here is a man who enjoys his job.

"Later, going to sleep, he would feel the fiery smile still gripped by his face muscles, in the dark. It never went away, that smile, it never ever went away, as long as he remembered."

The author is making the point how rooted this character is in his unexamined personality.

Double line space in the novel.

"He hung up his black beetle-colored helmet and shined it; he hung his flameproof jacket neatly; he showed luxuriously, and then, whistling, hands in his pockets, walked across the upper floor of the fire station and fell down the hole."

The subtext of 'black beetle-colored helmet' conveys how the character is insect-like.

"At the last moment, when disaster seemed positive, he pulled his hands from his pockets and broke his fall by grasping the golden pole. He slid to a squeaking halt, the heels one inch from the concrete floor."

This man's life runs on habit and routine.

"He walked out of the fire station and along the midnight street toward the subway where the silent air-propelled train slid soundlessly down its lubricated flue in the earth and let him out with a great puff of warm air onto the cream-tiled escalator rising to the suburb."

This conveys the novel is set in the future.

"Whistling, he let the escalator waft him into the still night air. He walked toward the corner, thinking little at all about nothing in particular. Before he reached the corner, however, he slowed as if a wind had sprung up from nowhere, as if someone had called his name."

This is a turning point, that something is happening in the life of this unconscious character.

"The last few nights he had had the most uncertain feelings about the sidewalk just around the corner here, moving in the starlight toward his house. He had felt that a moment prior to his making the turn, someone had been there. The air seemed charged with a special calm as if someone had waited there, and only a moment before he came, simply turned to a shadow and let him through."

The author wants reader to recognize this moment.

"The autumn leaves blew over the moonlit pavement in such a way as to make the girl who was moving there seem fixed to a sliding walk, letting the motion of the wind and the leaves carry her forward."

The description of the girl is ethereal, poetic.

"Her dress was white and it whispered." She "....stood regarding Montag with eyes so dark and shining and alive, that he felt that he had said something wonderful."

Again, evocative, poetic language. Montag the beetle is having feelings new to him.

She tells Montag she is 'seventeen and crazy.' And she lets him know that, unlike his neighbors, she is not afraid of him. This information is a revelation to him.

And then she asks, "Do you ever read any of the books you burn?"

The set up for this novel and Montag's role is in place. Will he wake up from his insect-like existence?

As she continues to speak about a life and world alien to Montag, he responds, "You think too many things," said Montag, uneasily.

Back in his home, he won't let himself think about what is hidden behind a grill, and he reflects about a clock, that it was "...moving also toward a new sun" Just as his life appears to be moving forward into a new world.

In his bedroom, Montag reflects, "He wore his happiness like a mask and the girl had run off across the lawn with the mask..."

Montag realizes his wife has taken pills to commit suicide. He makes a report and two technicians clean out her system and leave to handle the other nine calls they've received about suicides.

This conveys much about this world.

It comes out that his house has a TV that fills three walls and his wife desires a fourth wall so she can feel fully immersed in the world of TV. TVs had only been around for a year when Bradbury wrote this novel, but the novel is prescient about how people would want to use this technology to enter a cocoon.

Montag comes across Claire, who is on her way to see a psychiatrist for being anti-social.

And then Claire is gone, and Montag goes to a house to burn books, but the owner of the books, an elderly woman, refuses to leave. She not only refuses, she lights a match to set her house and books on fire, killing herself.

At home, Montag reveals to his wife what he has been hiding, books. Books that speak about a world that Montag no longer remembers.

The fireman is now at risk of being burned.

Fahrenheit 451 is a wonder example of a novel with a prescient message about what can happen when life is replaced by an artificial reality. Bradbury understood the message he wanted to convey.

Bradbury brings this world to life with a clear, evocative, poetic vision that is always in the service of the story he is telling. Bradbury is rightly revered as a storyteller.

To read more essays on the craft of writing, visit http://www.storyispromise.com