A Perspective on Shifts in Tone in Stories

These shifts can have the effect of disrupting the flow of a story.

To understand why this happens, consider that the foundation stone for what I teach about writing in A Story is a Promise is that a story creates movement, and the movement transports the audience.

That movement can be simple: boy meets girl, boy loses girl, boy gets girl back. Or complex: Mulholland Drive. Memento.

To understand this jarring effect, consider that you have grown up in Portland, Oregon, you are downtown, and request an Uber ride to the Portland airport, which is East. The driver shows up and gets on Highway 26, driving West.

You're going to have a visceral reaction to this. The direction of the movement of the vehicle is wrong. At a minimum, you're probably wishing you called a cab. If you are a young woman, alone, and it's night, you are probably having more desperate thoughts.

The reaction to a shift in tone in a movie, novel, or play is more subtle, but the reaction is the same. You go from sitting back to enjoy the ride to wondering why something just happened. You have been bumped from the story.

I'm not suggesting a movie can't have a twist. In the recent film Arrival, the main character appears to be having flash back about the birth and death of a daughter. These are actually flash forwards. I was tremendously impressed by the skill with which this was pulled off. But the issue of how we and the aliens in the movie interpret time was part of the story. The twist arose from the nature of the movement of the film.

Years ago Peter O'Toole was in a movie where he's an English aristocrat who believes he's Jesus Christ. He hangs himself on a cross. His extended family is desperate that he have a heir to continue the family lineage.

At the end of the film, Peter appears to be normal and goes off to attend a session of the House of Lords. But when seen from his point of view, he's switched from thinking he's Jesus to believing he's Jack the Ripper.

While the movie has a comic tone, Peter's family has always been in deadly earnest about the need to reshape his personality. The movie always had a realistic tone under the comedy.

A more recent example comes from the Men in Black series. In the first film, there's an overall comic tone but the character played by Tommy Lee Jones gives the story a moral center. He looks at humanity and individuals with a clear gaze. It's a wonderful film.

The most recent film, Men in Black: International, has one of the main characters played as a buffoon. Buffoons carry no dramatic weight. So the plot ambles along until the movie is over.

That shift in tone from comedic with a serious undertone to borderline slapstick deflates the action. It might have worked in a stand alone film, but as part of a series it just feels like the movie is going West when the airport is East.

Whether a dramatic effect is within the scope of a story's overall movement or not is situation where a writer might need to lean on skilled readers to convey whether an effect was amazing or disconcerting.

The recent online commotion over the ending of Game of Thrones is an example of what happens when the expectations of an audience are violated. 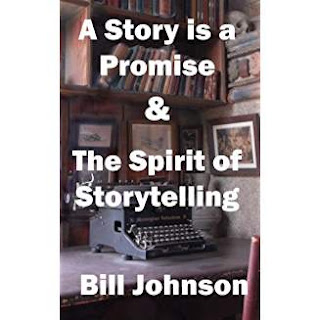 Bill Johnson is the author of A Story is a Promise & The Spirit of Storytelling, available on Amazon and Smashwords.

Posted by BillJohnson at 7:12 PM No comments: