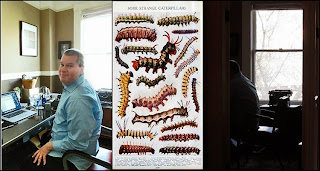 Novelist and story writer for both children and adults

When Salli says this is the interview that kept her laughing most, you can count on the fact that you’re in for a good time watching this clever chat with our 47th writer.

And, not only that, this is a 2-fer: one interview with two remarkable writers (although it should be said that Lemony Snicket only shows up for brief, whimsical moments during this film).

Handler is a writer. A prolific writer. And in this interview he explains why: he never learned how to do anything else besides write books, stories, movies, poems and musicals. Writing and telling stories is the thing he loves to do most, and in this animated and spirited interview you’ll see him share some of his insights, as well as tell a few zappers that Lemony Snicket would likely share if Lemony Snicket had been there.

Handler was first published after our daughters were in high school, so we didn’t get to read his stories to them at bedtime. But that’s not true for our granddaughter, and we’ve loved sharing his wonderfully twisted tales with her. The Dark is one of her favorite books, and she never seems to get enough hearing us read it to her.

This was a rare interview, and one that was difficult to arrange given Handler’s kinetic schedule and many demands. His latest novel, We Are Pirates, had been released only a few days before we caught up with him at his home in San Francisco. So, as you watch this interview keep in mind, he’s a busy and very creative mind. He’s active in politics, the arts, and the community. He sings, plays accordion, hosts literary events and so much more. Daniel Handler is an example of the Renaissance artist with interests as wide and rich as the human mind can stretch.

We’re honored he took the time to meet and talk with us, and pleased we can share his story with you.