So, I took the 25 stamped envelopes out to my car, put them under the front wheel, and drove over them.

If you can't stand the sight of spilled ink, stop reading now. Move to Canada. Save yourself.

Anyway, about 21 of the envelopes did get some version of being flattened. Four were ripped apart and had tire tracks on them. I knew I couldn't pin this on the post office since I hadn't mailed them yet, so I had to admit semi-defeat.

Thinking about it, I realized what I could have done was broke into a zoo late at night and hired an elephant to stand on the letters. I'm still trying to figure out what zoo elephants charge for working after midnight. I've seen several figures. It's worse than trying to figure out non-profit bulk mail rates.

Anyway, I think that would be safer than asking a bear to do it, but I guess that depends on what the bear would charge, too.

Just to put this in context, when I was a little kid I decided to bake a cake. It said put two eggs in the bowl. It didn't say take two eggs out of their shells and put them in the bowl. Turned out to be a very crunchy cake. I didn't have a driver's license so I couldn't use a car to drive over the eggs. Anyway, my parents kept a close on me when I was in the car, after the day I decided to open the door and get out about a block from home. I hadn't learned to tuck and roll when exiting a moving vehicle, so I had some bumps and scrapes for my effort to speed up the process of getting home. In my defense, in those days they didn't have a warning label on the door about exiting the vehicle while it was moving.

In my defense of my creative genius, a friend with a Volkswagon bug broke down late at night; the throttle cable broke. I rigged a piece of string to the throttle on the carburetor and ran the string over the top of the bug to the driver's side window. He pulled on the string and managed to drive home.

There might have been a better way to do this, but the elephants at the zoo weren't taking my calls that night.

The string trick doesn't work with women and sex, but I could have been doing it wrong.

The Use of a Double in Storytelling

I recently re-watched Fringe, a television series. In one episode, I noticed a very striking technique being used. In the episode, one character feels out of place. The plot of the episode is that he's helping hunt down a character doing evil in the cause of -- fitting in. When the main character questions the character and finds out more about his motives, everything the murderous character says about doing whatever it takes to fit in, the dialogue has a subtext and a level of deeper emotions because the viewer is aware of the main character's issues.

One aspect of powerful storytelling is making what a main character feels accessible to an audience. Struggling writers are often so immersed in introducing a character, getting across their background, their history, their surroundings, creating a picture of their relationships, everything really except what an audience often craves from a story, something that suggests an author can help readers/viewers go on a journey to a state of deeper, potent feeling.

When novels become hugely successful while being denigrated by literary stylists, they have often created that deeper journey people crave from stories.

On a side note, I helped an author with a memoir that had a vivid and compelling action line...but I could barely get her to convey her feelings toward those closest to her, and to her own deeper feelings about tragic events in her life. On a first read, her deeper feelings were an almost complete void.

A literary agent passed on her memoir (that someone had, when the main events of the memoir happened, offered her $50,000 for the movie rights, but that was long ago).

It happened that another story person read her memoir and helped her to write about those deeper feelings from the first paragraph of the memoir, and the literary agent who had passed on the book agreed to represent it.

If you're not writing a sequel to a well-written movie about dinosaurs, you need to get to that deeper place and take your readers with you. 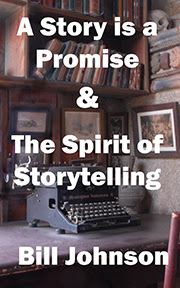 To read some of my longer reviews of popular movies, check out my writing workbook, A Story is a Promise & The Spirit of Storytelling, available on Amazon's Kindle and Smashwords.

Posted by BillJohnson at 12:00 AM No comments: