When a story fails to introduce a discernible, engaging, dramatic promise, it sets in motion what I call the cascade effect. Because there’s no suggestion of a story’s promise, the story’s audience focuses more closely on characters for some suggestion of what a story is about. Since struggling storytellers often keep introducing characters to give a story a sense of forward movement, a story’s audience has to keep paying attention to new characters, hoping one of them will begin to suggest some point to a story.

When characters fail to set a story into motion, some writers will create what I call artificial events to begin a story. This might be a dramatic scene with intense action, but since the action isn’t rooted in what the story is about, these artificial scenes only increase the amount of material an increasingly confused or frustrated audience must traverse looking for meaning.

Since everything characters have to say about these artificial events is generally meaningless -- since those events have no real impact on a story’s course or outcome and could be removed or changed without affecting a story – an audience is being asked to pay attention to dialogue that serves no point. Paring down this dialogue risks scenes becoming even more obscure.

I see a three step response to such a story. The first step is for a reader to take one mental step back and wonder if the story is as pointless as it appears. If the reader continues and finds more of the same, a second step is to start skimming ahead looking for something that pulls the story together. When that doesn’t appear, a third step is to stop reading, or possibly glance to the end just to confirm the writing never quite jells.

I found a great example of what happens when a story goes down this path of obscurity from a student who recommended I break down a Mystery Science Theatre film in class, Pod People. In Mystery Science Theatre, an astronaut and two robots are forced to watch bad movies. To pass time, they heckle the films and throw in funny dialogue, just as in real life, when a film stops advancing in a purposeful, meaningful way that rewards the attention of an audience, a film’s audience is left with plenty of opportunities to either start picking out plot flaws, character inconsistencies, or thinking up funny remarks to pass time.

The opening events of Pod People include silent footage of a large alien killing someone and being hunted down by a mob and killed. This alien does not appear in what follows, so I couldn’t figure the point of this prologue.

Next a meteorite streaks against the night sky and crashes in a forest. In a cave, what appears to be radioactive raspberry jam from the meteorite glows with menace. Meanwhile two men in the woods at night are surreptitiously hunting for eggs. This introduces two characters in the film, so we have a plot action – they are doing something concrete -- but no suggestion of a story. It’s just action. there is the question of what will happen when they find the eggs in the cave.

A young boy who lives with his family in the woods brings one of the eggs home and it hatches and the hatchling grows into Trumpy, a small alien with an elephantine snout. The second egg hatches and becomes another alien that is shot with an arrow by the men in the woods. When the wounded alien comes across someone it considers hostile, it’s eyes glow like headlights and people disappear.

The good Trumpy is hidden by the boy. The little boy spends most of the film hiding good Trumpy from his parents. This creates a plot question – will he be able to keep Trumpy hidden – but not a story question. There’s also a question of whether Trumpy will turn his high-beams on the kid if the supply of peanuts dries up.

Meanwhile, a band of 60’s style teenagers is recording a song in a recording studio. Everyone in the group has a personality, and several of the teens are upset about the band’s singer being interested in a new girl. She’s invited to go camping with the group.

Everyone in the film has something to do. There’s just no collective purpose that would give the story a direction. It’s all plot, action, consequences of action that leads to new actions and consequences.

The evil Trumpy attacks the unliked girl in the woods, and the teens flee with her to the house in the woods. Meanwhile, good Trumpy has quite an appetite and the little boy must become more inventive in sneaking him food.

Because there’s nothing that connects the story elements other than cause and effect – there’s no story line – the only real question left is who will survive to the end of the story.

As the story continues, the teens and adults who have survived encounters with evil Trumpy finally realize another alien is in the house. They want to kill good Trumpy, but the little boy manages to help him get out of the house.

In the climax of the story, good Trumpy escapes.

What might have created a story line to go with all this plot?

The two egg hunters could have mirrored the good/evil split of the two aliens.

There could have been a message about our violence being mirrored back to us; that because the little boy is innocent of violent intent, he doesn’t create violent situations.

Even a sly sense of humor about other horror/science fiction films (Army of Darkness) could have provided a subtext for the film.

In terms of being a story, the film is a blank slate.

Putting characters into mortal danger is a fixture in many science fiction and horror films, but having a story to go with the plot makes for a more powerful film.

Pod People isn't the only film I've broken down in a class where no one could figure out a point for the story. When big budget Hollywood films fail to find an audience, some variation of the Cascade Effect is at play, I've played up to 25 minutes of opening scenes, and no one could say, 'This is a story about X.' 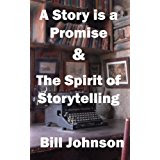 To read some of my longer reviews of popular movies, visit my website or check out my writing workbook, A Story is a Promise, available on Amazon Kindle and Smashwords.

Posted by BillJohnson at 6:58 PM No comments: