"Desire is often the greatest poison."


One of, I think, the greatest lines I have read in any book. In addition to providing a fantastic commentary on our world it perfect serves to sum up Ms. Azinger's most recent book. Please understand, I don't mean to say desiring the book too much poison's the experience, but that the book itself perfectly blends poison and desire into one of the best fantasy books I have read in the past twelve months.


Every time I pick up one of the Silk and Steel books I do so with a certain amount of trepidation. Could this book possibly be as good as the past one/two/three have been? And each time I have been happy to answer that yes, yes they could. This time I can say that this book is in fact BETTER than those which preceded it, something I never expected to say. 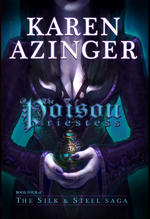 The Poison Priestess begins during the same time frame as the Skeleton King, except where that book focused on event to the north or Erdhe this book contains itself to the south. For fans of the stories of Liandra, Steward, and Jordan this book will strike a perfect cord. The action is fast past in all the right parts, while slowing down at some places to allow the depth of the events which just happened to sink in. Azinger's miraculous use of pacing and tone are in full display in this book and it shines because of them.
The story of Liandra especially fleshes out in this novel. Torn between emotion and duty her character deepens and anneals into something completely new and amazing. I must say that although she has long been my favorite character she definitely came into her own this time.


The other stories are just as rich and rewarding, from the darkly sinister Lord Raven's march towards Laverness and Pellanor to the Priestess's seductive personality. Each is peppered with surprises and plot twists so shocking that I often found myself rereading passages to make sure I was right in what I thought was going on. Hints of foreshadowing also are woven into the story so numerously that I doubt any reader could ever catch them all on a first try. One detail especially sticks in my mind as one of the best hidden bits of foreshadowing I've read to date.


In totality if you've already begun down the path of the Silk and Steel Saga prepare yourself for a return to Erdhe which, while darker than any of the preceding books, most definitely deserves its place in the series. If your new to the series stop reading this moment and go buy the first book, it is most certainly a series which gets better with every book and is well worth the investment.
As Erdhe girds for war readers wait in anticipation for The Battle Immortal.
http://www.goodreads.com/book/show/16141427-the-poison-priestess
Posted by BillJohnson at 7:04 PM

Scenes are the bricks or building blocks of fiction. They’re based on conflict and change. Each scene moves the story forward (or sometimes backward). They happen in real time, blow-by-blow, often sizzle with excitement and contain twists and surprises, and readers lean in close, wondering how each scene will resolve.

Sequels are the transitions that happen after the scenes. Sequels are focused on the aftermath and ramifications of a scene. When especially intense scenes happen, especially if a scene ends in disaster, setback, or failure, characters need a chance to sort through their emotions and thoughts. Often what comes first in a sequel is the POV character’s raw feelings like anger or despair. As in real life, once the character calms down, he or she is able to more objectively understand what has happened. From this understanding the character reaches a decision or new goal.  Sequels are important for shaping characters and motivations. Thus the structure for sequels are emotion, ruminating, decision or goal.

For example, a couple who just started dating go out for dinner, drink more than they planned to and end up in bed together. Or perhaps they confess too much, reveal too much.  What takes place during the dinner or in the bedroom is unplanned and a game changer. The next day comes tough realizations and decisions. Does one of them back off the relationship? Is one scared by the depths of his/her feelings? Do they realize that they’ve made a big mistake?

Or a scene can take place at a funeral. Often while at a funeral  characters might feel numb, or overcome by grief, or are desperately struggling to keep it together.  Afterward, in the sequel a character or characters have an opportunity to sort through their emotions Will they feel regret, relief, or anger? What will these feelings lead to? If someone was murdered this could lead to revenge. If someone died too young, perhaps the mourner wants to take more risks in life so then boldly asserts him or herself. Which then leads to a new scene.

Not every scene needs a sequel, especially near the climax or in fast-paced genres like thrillers. Typically stories that feature a lot of emotional risk such as romances or coming-of-age stories will contain more sequels. While sequels often feature analysis of what just happened, it’s important that it’s just not a rerun of the past events. Somehow the sequel must also be externalized. This means the character cannot sit around weeping or thinking alone in a scene—put the sequel into action. The character can call a friend or start working furiously, struggling to brush away unwanted emotions. It’s also important that sequels don’t go on too long. If you’re story feels too slow, make sure if every sequel is needed or if they can be tightened.

Sequels can also be about the physical impact of the scene—perhaps your character needs to bind a wound or force her breathing and heart rate back to normal. Horror stories use sequels to milk the suspense and fright factor. The character can call a friend or realize she’s in danger and start packing, madly tossing clothes and items into a suitcase. A private investigator can call in for backup and strategizing on taking down the bad guy.

Without sequels fiction is a series of actions wham bam zipping around. Thus sequels help pacing, space out the action, add pauses in the action. It also helps with the buildup and easing off of tension. Sequels are also a great place to slip in back story via thoughts or flashbacks. Remember too that as in real life, we come to know characters better when they fail and pick themselves up again. This picking up and dusting off occurs in sequels.

She is currently hosting the Making It in Changing Times Mini-Conference in Portland on January 26th.

Notes on the Opening Page of The Casual Vacancy, by J.K. Rowling

Which asks the question, what is special about this Sunday?

Barry Fairbrother did not want to go out to dinner.

Which asks the question, why? One would also assume Barry is an important character in setting up the plot of the novel.

He had endured a thumping headache for most of the weekend and was
struggling to make a deadline for the local newspaper.

This answers the question, why doesn't he want to go out to dinner? And also relates something about Barry's background, that he writes for a newspaper, and raises another question, why is he struggling to make this deadline? And, what is important about this article? Question, answer, question, a process often used to set a story in motion.

However, his wife had been a little stiff and uncommunicative over lunch,
and Barry deduced that his anniversary card had not mitigated the crime
of shutting himself away in the study all morning.

Struggling writers often start with the same details, but not the question, answer, question process that draws in readers and draws them forward. It's not about putting an actual question mark at the end of sentences, but naturally raising questions. When this process is done well, readers quickly learn to trust that if an author raises a question, it will be answered. In a badly written novel manuscript, one quickly despairs of getting anything other than an accumulation of descriptive details. It's the 'I'm watching this story as a mental movie and writing down the details' style of writing that locks in new writers to a faulty style of storytelling.

It did not help that he has been writing about Krystal, whom Mary
disliked, although she pretended otherwise.

“Mary, I want to take you out to dinner,” he had lied, to break the frost.
“Nineteen years, kids! Nineteen years, and your mother's never looked
lovelier.”

This dialog conveys a dramatic truth about this marriage, that both the husband and wife casually lie to each other. Readers in the beginning of a novel need these kind of truths about a story's characters. Without that, one is simply being offered a collection of details, like someonr cataloging the details of strangers in a photo without providing some clue to why anyone should care.

Mary had softened and smiled, so Barry had telephoned the golf club,
because it was nearby and they were sure of getting a table. He
tried to give his wife pleasure in little ways, because he had come to
realize, after nearly two decades together, how often he disappointed
her in the big things. It was never intentional. They simply had very
different notions of what ought to take up most space in life.

In one paragraph, Rowling creates a damning portrait of a failed marriage, which raises the question, why are these two people are still together? And, if the mutual lying can continue to keep the marriage on life support.

Very often when I read novels by struggling writers I have to go on, and on, and on about conveying a main character's dramatic truth with their introduction. Often I find an utter lack of understanding of why this is important, or a weak attempt at it so the writer can continue on with their seeming passion, accumulating details that have no context, hence no dramatic purpose, eventually creating an impassable swamp of undifferentiated details.

This is why literary agents generally don't have to read more than a first paragraph to know if they are reading a well-told story. Agents are generally being kind when they tell people they read the first five pages.

Barry and Mary's four children were past the age of needing a babysitter.
They were watching television when he said good-bye to them for the last
time, and only Declan, the youngest, turned to look at him, and raised his
hand in farewell.

There's a powerful question here, why is he saying goodbye for the last time? What's going to happen? This creates a compelling reason to keep reading.

Five paragraphs, the dramatic truths of these characters, and a powerful reason to keep reading. This is what successful novelists do on the first page of a novel.

Bill Johnson is the author of A Story is a Promise & The Spirit of Storytelling, available on Amazon Kindle for $2.99 and on Smashwords (includes listings for Apple and Sony).

Posted by BillJohnson at 6:27 PM